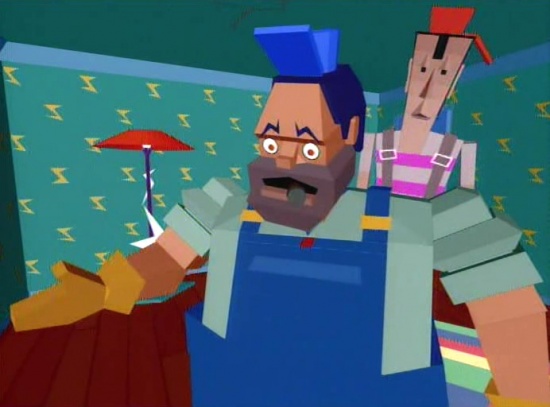 A still from the 'classic' "Money for Nothing" music video.

Dad Rock is a regular column on Texture Magazine re-visiting and re-evaluating various â€˜liteâ€™ favourites of yore. Though typically relegated to pawnshops and discount bins the world over, we feel these albums are worth a second listen, free from any sort of ironic appreciation.

Now is an interesting time to write about Dire Straits’ 1985 album Brothers In Arms. Currently, the British band’s biggest hit, â€œMoney For Nothingâ€, is banned on all Canadian radio stations involved with the Canadian Broadcast Standards Council, based on the word â€œfaggotâ€ appearing in the second verse. This is kind of a big deal, considering it was a huge single back in the mid â€™80s, yet has taken 26 years to be banned. Iâ€™ll get back to my opinion on this situation later on, because Dad Rock is made to hype up the golden oldies!

I didnâ€™t find out until I was in my early 20s that Dire Straitsâ€™ frontman Mark Knopfler was considered to be an amazing guitarist. I guess when youâ€™re five, you donâ€™t really care about mind-melting solos or cool riffs. Itâ€™s mostly about being able to sway, or dance really fast. This particular album was more about the sway, but it didnâ€™t stop me from going nuts every once in a while.

Back then, I thought â€œMoney For Nothingâ€ was amazing because of its computer graphic video that cost the band millions of dollars. I always looked forward to it on Much Music. Yet the whole song is pretty much perfect. First thereâ€™s the synth build-up at the beginning with the falsetto vocals, followed by the drum solo, then that rippinâ€™ guitar riff! No wonder parents were into this stuff. Itâ€™s the best soundtrack to rip into a brew.

Now, the story about this song has to do with Mark Knopfler and his pals hanging out at a bar, with some drunk guys making fun of them. The â€œfaggotâ€ part is what one of the wasted guys said. So, the context of the song is more about them getting hassled by these total jerks. The CBSC does not take context into consideration. It has more to do with the word on its own.

In my opinion, this is completely unfair. To be living in a country that supposedly champions free speech, it seems harsh to make an artist change the lyrics of their song because of a single word. Under these guidelines, most pop songs would be banned due to the amount of sexual innuendos present. Itâ€™s a topsy-turvy world I tell ya.

Dire Straits doing what they do best: blowing.

On a lighter note, the song following â€œMoney For Nothingâ€ is a fun swamp pop stomper called â€œWalk Of Life.â€ After so much controversy, itâ€™s nice to hear something a little upbeat! This one was always great for getting wiggly on the dance floor. This was just a trick though, because afterwards I was always bored to death with â€œYour Latest Trick.â€ Nowadays I really enjoy the sax magic on this crooner, but ultimately itâ€™s long, boring and not worth my time. But oh god that sax. So soothing. Just play that part on repeat.

Actually, forget about the next song too. â€œYour Latest Trickâ€ is eight minutes of the same old shit going on. Who cares? I donâ€™t know how this was a pick of mine in the first place! Was I a boring kid? I have to re-evaluate my childhood. Moving onâ€¦

Ah yes, â€œRide Across The Riverâ€: A great tune to play when youâ€™re pretending to go on a jungle expedition. Dire Straits have the jungle jams down on this one. Well, for white Brits in a classic rock band that is. This song has more of a crooner vibe as well, but with a little bit of mystery and a weird exotic vibe. Itâ€™s kind of weird to think of these guys making a song that sounds like a jungle. Who comes up with these ideas? I swear there are samples of bug sounds here too. Remember â€” this album is considered to be a classic.

â€œOne Worldâ€ sounds like a Ween parody. The basic formula is really bad blues guitar soloing over some simple â€™80s drums, while Mark Knopfler sings through a can. In other words: horrible.

The albumâ€™s closer and title track another stupid one. It’s basically a super slow ballad that takes forever to build up, and then goes nowhere. Whatâ€™s up with this record? To be honest, I donâ€™t know why I ever liked it in the first place. It starts off pretty good, but by the middle it slows down considerably. Regardless of its controversy, Brothers In Arms is just a bummer. Remember â€œSultans Of Swingâ€? I bet the album thatâ€™s on sucks too.